International Voluntary Standards and Implementation of the Paris Agreement 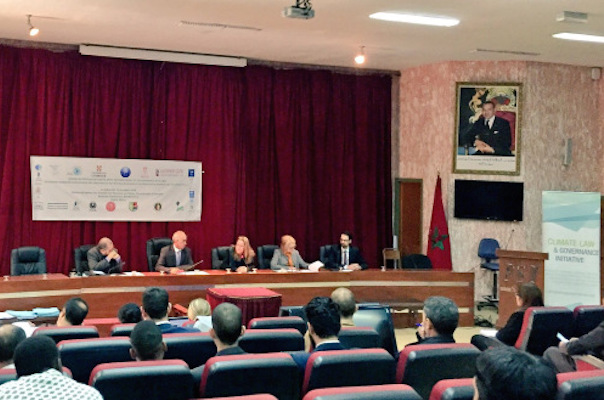 This post is to provide a recap of an expert roundtable, organized by GHGMI Adaptation Leader, Ira Feldman, that introduced the role of international voluntary standards in advancing the implementation of the Paris Agreement.  This roundtable was held during COP-22 in Marrakech, as part of Climate Law & Governance Day’s full-day dialogue around the theme, “Crafting the Paris Rulebook and Implementing the Paris Agreement.”  The event was convened by the Climate Law and Governance Initiative (CLGI)[i] in partnership with a host of intergovernmental, NGO and private sector entities, over 250 legal, policy and governance experts gathered at Universite Privee de Marrakech to participate in expert roundtables focusing on climate instruments; climate litigation; climate finance; and climate justice.

Recognizing that the Paris Agreement provides the framework but not the details for implementation of climate action, the session sought to address questions such as the following

Panelists suggested that voluntary standards have a history of driving technological innovations and emissions reductions where they might not otherwise occur, and that they often eventuate into binding regulation. They pointed to this and other trends and recent political developments to emphasize the imperative for the climate law and governance community to recognize the potential in international voluntary standards. Standards can help to facilitate transparency and accountability in the trend towards inclusion of non-state actors in climate change action.

Standards can also be driven from the private sector, filling gaps that are not being addressed by regulation. They were also raised as a possible tool to drive increasing ambition, a goal taken by some of the companies participating in this session. In particular, the panelists suggested that standards could be a useful tool in linking climate change action and sustainable development.  The panelists also explored whether an ISO standard on climate finance could help mobilize the private sector funds necessary to meet the climate change challenge.

The panel asked how the ISO voluntary standards development processes could coordinate with and complement UNFCCC initiatives, and how voluntary international standards and other “soft law” tools can be effectively utilized in legal and regulatory regimes. The discussion noted the power of standards in representing global consent, as well as open, democratized living documents. Overall, the session called for using and referencing international standards to support public policy, and for dialogue between the standards and law and governance communities to develop and implement innovations in this area.

Ira Feldman opened the session with a brief review of the framing questions for the discussion (see above) and, for those unfamiliar with the “parallel universe” of voluntary standards development, he provided a quick primer on standards basics and the acronym-heavy language of ISO, the International Organization for Standardization.[ii] He explained that, within ISO’s Technical Committee 207, Subcommittee 7 focuses on “Greenhouse Gas Management and Related Activities,” a scope that includes both mitigation and adaptation, as well as climate finance.[iii] He anticipated that the panel would touch on all these aspects of the climate discourse, along with a discussion of how voluntary standards might pave the way for new business models.

Ira connected the use of international voluntary standards to the traditional law and governance space by suggesting that standards, viewed by many as “soft law,” often evolve into “hard law” (statutes, regulations, etc.) either by establishing norms for best practices or via incorporation by reference. Similarly, he noted especially as applied to supply chain management, the use of consensus voluntary standards is becoming a key component in what has become known as “private law” and voluntary standards are widely used as the basis for “eco-labels.”

More specifically, Jose Luis acknowledged that public policy makers have multiple options when looking for a solution to a particular public issue. They have the option to develop their own guidance “in-house,” which can then be referenced in policy. However, this option can be very expensive and time consuming, and may also inadvertently create trade barriers, since the use of unique or ad hoc solutions by a country could effectively restrict access to its markets. By utilizing voluntary standards as a solution, he suggested, policymakers can save them considerable time and money and show their commitment to open and fair trade.

Jose Luis concluded by promoting international voluntary standards as effective vehicles for providing the minimum technical performance details and the safety and environmental requirements required to make a good policy work. Since the development of such standards draws on international expertise and experience, they are a vital resource for governments when developing public policy.

Tom Baumann observed that the era of the Paris Agreement and the Sustainable Development Goals (SDGs) is significantly increasing demand for more standards and improved links among standards. However, the conventional standards development organizations (SDOs) do not have the capacity to develop all the standards in a timely and coordinated manner across the spectrum of issues. Therefore, meeting these new demands will require a new approach that is able to utilize digital technologies (e.g. online collaboration, knowledge hubs) to support the next generation of standards systems.

Tom articulated the fundamentals of such a Standards 2.0 approach,[v] which will affect various key aspects of standards development, including:

Tom concluded with a preview of how the combination of these “moving parts” can lead to new business models to motivate participation in standards development and uptake of the resulting standards in the marketplace.

Sarah Leugers built on the previous presentations by asserting that standards are the building blocks of markets, providing trust and confidence in processes and outcomes, as well as the ability to measure progress. She noted that, in carbon markets, voluntary standards have demonstrated the ability to deliver value not just toward climate mitigation but also toward sustainable development. With the advent of the SDGs and continued integration of the climate and development agendas, standards that contribute to both can maximize returns on investment.

Turning to the Paris Agreement, Sarah described a framework that can help Parties to the Agreement use sustainable development as a lever for more ambitious climate action. She noted that the Agreement also calls on “non-state actors,” especially the private sector, to step forward and contribute to mitigation, adaptation and climate finance. Sarah introduced the Gold Standard for the Global Goals as a standard to meet the challenges of this new paradigm.[vi] The Gold Standard framework is intended to support Parties and non-state actors in this endeavor by providing the following three key components:

Gareth Philips reminded the audience that the Kyoto Protocol created standardized or commoditized units of carbon that were fungible, giving rise to carbon trading and the Clean Development Mechanism. In turn, he explained, private sector investors and project developers were motivated to pursue mitigation projects. In contrast, Gareth asserted, the Paris Agreement very deliberately avoids any such standardization and leaves it up to Parties to set their own level of ambition in their (Intended) Nationally Determined Contributions ((I)NDCs). Against this background, there are number of significant challenges to trading and transferring emission units or emission reductions that need to be addressed before a market-based mitigation mechanism can play a significant role in achieving the Paris Agreement.

Through his work at AfDB, Gareth has been exploring the possibility of establishing an Adaptation Benefit Mechanism that would use similar modalities as the CDM to deliver Adaptation Benefit Units (ABUs) to willing buyers.[vii] Since these units have no compliance value, Gareth believes they would not need to be fungible. Further, because they carry no compliance or environmental liability, they would be easier and cheaper to create but would still represent a transparent, results-based payment mechanism.

Under Gareth’s proposal, ABUs are not directly linked to the accounting instrument of the Paris Agreement. Therefore, host Parties would “give” these units away without impacting on their ability to meet their NDC. At the same time, voluntary buyers could declare their financial support as climate finance and claim to have helped the host country adapt to climate change. The proposal also contemplates that unquantified mitigation co-benefits would be retained in the host country to help meet the NDC. In conclusion, Gareth suggested that such an Adaptation Benefit Mechanism could be created and implemented simply and quickly to provide an effective mechanism for the transfers of climate finance based on adaptation needs and funding preferences.

Jeff Cohen’s presentation focused on the utility of standards to differentiate commodities based on environmental attributes. Global efforts to reduce greenhouse gas emissions that contribute to global climate change have largely focused on controlling emissions from downstream sources such as power plants. However, Jeff explained that the raw material commodities or “feedstocks” to global supply chains, are typically not accounted for in government or corporate greenhouse gas inventories.  Any given commodity (e.g., palm oil or crude oil, cotton or concrete) can have widely different profiles in terms of energy (and resulting GHG emissions) as well as differing water, land-use, and many other indices depending on how and where the material is extracted or harvested, and processed.

While there is steady interest in the lifecycle impacts of various products and in certifying sustainably sourced materials, global markets today do not receive timely and accurate information about the environmental and social impacts associated with commodity production. This disconnect, Jeff asserted, prevents delivery of real-time impact information to end-users and other market participants, limiting investments consistent with the scale and pace required to meet science-based targets for climate and the SDGs.

Jeff described a new effort to develop a standard framework that enables real-time quantification and verification of social and environmental impacts applicable to any commodity. This innovative approach will utilize today’s advanced technological capabilities, including remote sensing and blockchain technology. He announced that his organization, Xpansiv Data Systems, has launched a pilot, i.e., a proof of concept for methane leakage in natural gas production, with standards organizations and a range of market participants.[viii]  Jeff expects that, before the end of 2017, this new platform will be capable of delivering verified, standardized metrics to global markets that will enable differentiation of more sustainably produced commodities.

By arrangement with the organizers of Law & Governance Day, in the coming months the co-sponsors of this panel — greentrack strategies, EOS Climate, Interactive Leader, CSA Group and Gold Standard – will be producing a series of policy briefs on the themes introduced in this session. These briefs will be distributed to the full UNFCCC list. Based on the success of this panel which opened a new area of inquiry, the Climate Law and Governance Initiative has expressed its commitment to further explore the role of international voluntary standards and implementation of the Paris Agreement.

[i] The Climate Law and Governance Initiative (CLGI) website, available at: <www.climatelawgovernance.org/>.

[ii] In ISO parlance, National Standards Bodies are “NSBs,” Technical Committees are “TCs,” and New Work Item Proposals are “NWIPs.” “ISO” itself is not an acronym – it is the Greek word for “equal,” underscoring ISO’s role in harmonizing standards.