Recent breakthroughs have elevated algae as a promising biological solution to environmental challenges. Particular species of algae can provide low-impact, non-fossil substitutes for liquid fuel and plastics and can decrease enteric fermentation emissions from cattle. Now, a recent Nature Geoscience paper quantifies the role of kelp and other macroalgae in the global carbon cycle. The peculiarities of seaweed carbon cycling may skirt “permanence” issues that have plagued other biological carbon sinks, such as terrestrial forests. Future research may enable business and government to recruit kelp forest rehabilitation as an additional approach to climate change mitigation.

When reforestation occurs and trees grow by performing photosynthesis, the carbon dioxide removed from the atmosphere is stored (“sequestered”) in biomass. Unlike reduced emissions which “no longer exist,” the carbon in this biomass is physically vulnerable.

Unplanned deforestation and forest degradation can release this stored carbon back into the atmosphere. These unplanned occurrences reverse the beneficial effects of carbon sequestration. In other words, the sequestration turned out to be temporary. Concerns about “reversals” have long challenged reforestation and afforestation as practical approaches to climate change mitigation. Carbon offset markets (e.g., California’s cap-and-trade system) employ technical fixes like “buffer accounts” to reduce the risk of over-crediting, based on the statistical risk of reversal. However, concerns around permanence continue, and surely limit both financial and political investment into restoring ecosystems for climate purposes.

These concerns regarding permanence apply to all “enhancements” of carbon stocks, because of their physical vulnerability. All actions to improve carbon stocks—whether through reforestation, in soils, with coastal blue carbon (e.g., planting mangroves), or through industrial carbon capture and storage—carry real risks of reversal through human or other disturbances.

One recent study suggests that kelp forests may work differently. Carbon sequestration by kelp forests may be unusually “permanent,” due to their specific carbon cycle and the “wild” nature of the deep oceans.

In their Nature Geoscience paper, “Substantial role of macroalgae in marine carbon sequestration,” Professors Dorte Krause-Jensen and Carlos M. Duarte synthesize existing data on carbon sequestration by kelp and other macroalgae to develop a “first-order” estimate of kelp sequestration processes, destinations, and quantities. Their initial estimate suggests macroalgae sequesters about 634 million tonnes of carbon dioxide per year (173 TgC), more than twice the net sequestration from China, the country with the greatest net carbon sequestration. While 10% of this is buried in coastal sediments with a risk of anthropogenic reversals, an estimated 90% is exported to the deep sea!

Most immediately, carbon moves from seaweed biomass to the Dissolved Organic Carbon (DOC) and the Particulate Organic Carbon (POC) pools. DOC refers broadly to organic molecules dissolved in water. Seaweeds and other marine photosynthesizers continually release organic material that readily dissolves in water. This material can settle in place, travel to other parts of the ocean, or be rapidly consumed by microbes.

POC refers to drifting pieces of biomass, such as kelp fronds, which can gather in enormous rafts. This detritus can float hundreds of kilometers, kept buoyant by air bladders and protected by chemical compounds that render kelp unpalatable to most animal species. This process of drift occurs with other macroalgae such as Sargassum and Desmarestiales as well. Combined with ocean circulation patterns, the carbon sequestered by macroalgae arrives in the deep sea, especially submarine canyons. Storms rip fronds and whole plants from the ground to accelerate the export of material and sequestration of carbon into the deep sea.

Moving carbon from the atmosphere to the deep sea

For those interested in the numbers, the authors of the Nature Geoscience paper estimate the following average carbon fluxes (flows), synthesizing existing data sources and studies: 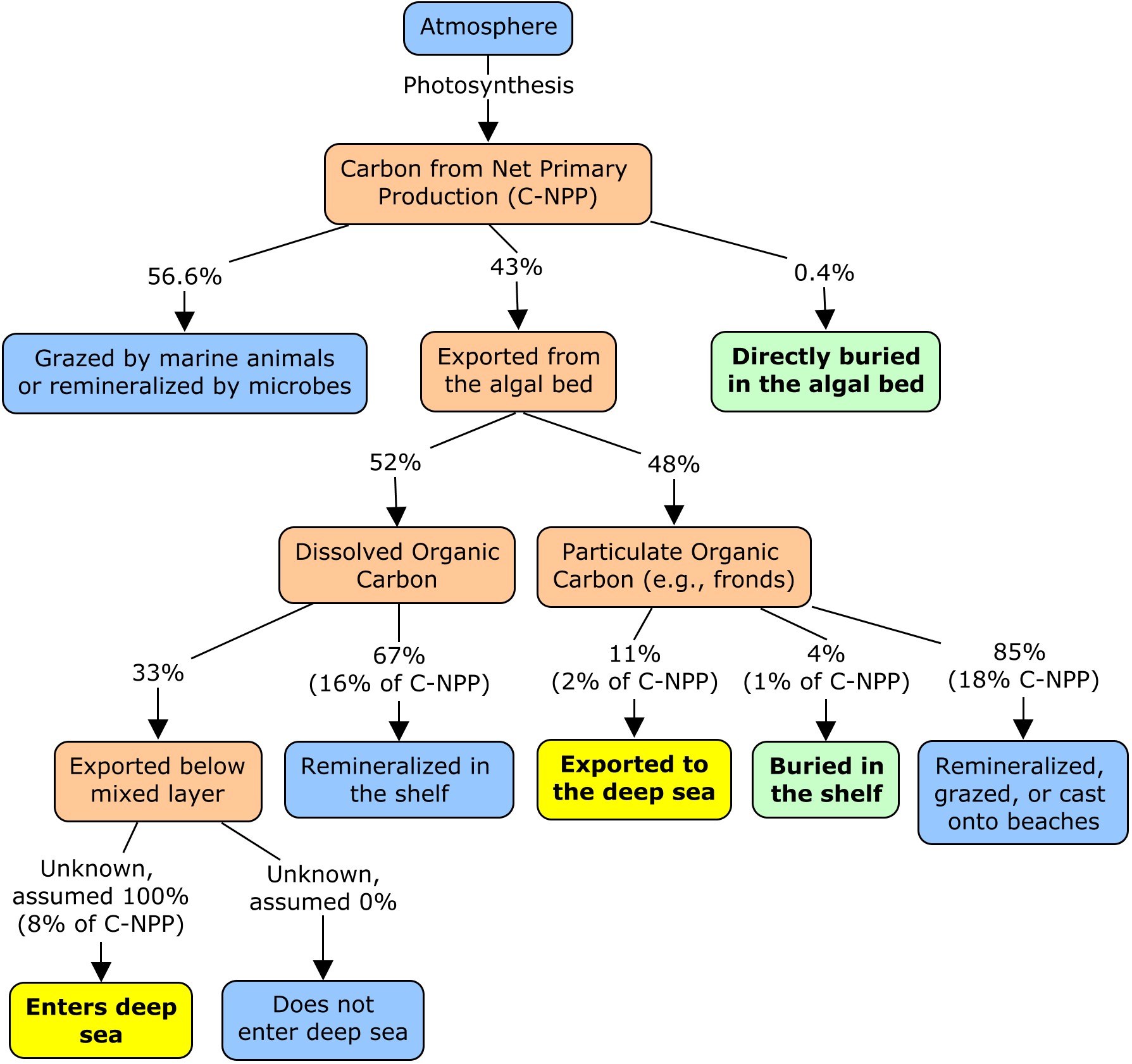 The carbon buried in the algal bed and buried in the shelf is vulnerable to reversal due to human influence on coastal sediments. This sequestered carbon is conceptually similar to the carbon sequestered in other blue carbon ecosystems.

The carbon from the export of DOC and POC, however, largely ends up in the deep sea, where it faces minimal risk of reversal.

This “deep sea sequestration” represents an estimated 88% of the net carbon sequestration by macroalgae, or about 10% of biomass growth.[1] And it suggests that this carbon may avoid the permanence issues that complicate sequestration for forests, other terrestrial ecosystems, and other blue carbon ecosystems. Unlike these other ecosystems, the deep sea has few direct land-uses, such as farms, urbanization, industry, or coastal resorts. Because the sediments of the deep sea have so little human contact, carbon that enters the deep sea is theoretically insulated against the risks of reversals that affect other biological carbon.

Until now, kelp forests and other seaweeds have received almost no attention in terms of climate change mitigation policy discussions. Even other blue carbon ecosystems (seagrass meadows, tidal marshes, and mangroves) are a relatively new field. Why is this research into seaweed carbon sequestration important?

First, this paper raises the profile of carbon sequestration by seaweeds. Better understanding the role of macroalgae in the global carbon cycle is inherently important as a scientific pursuit. This paper is only a “first order estimate,” as there is significant uncertainty in the authors’ numbers. Much more scientific work will be required to increase the resolution and improve these estimates. For example, future studies will need to confirm that there are no other natural or anthropogenic processes that cause this carbon to cycle away from the deep sea and back into the atmosphere.

Third, if further research confirms reduced reversal risk for kelp, this insight could impact and accelerate the creation of kelp reforestation methodologies on the offset markets. Under California’s cap-and-trade system, to address permanence concerns, forestry projects sign 100-year contracts and place a share of their credits into a buffer account to protect against the risk of unintentional reversals (e.g., wildfires). Low-risk kelp projects could potentially skirt these requirements, making oceanic sequestration projects more profitable to project developers.

Finally, kelp-based offsets may command a higher quality status, given reduced reversal risk. Although the carbon offset is theoretically a fungible commodity, in practice, the characteristics of offset projects do affect offset price in the voluntary market.[4] Factors such as project charisma and co-benefits can lead to higher prices. Risks of low additionality or reversal can depress prices. Lower risk of reversal could place kelp sequestration on a higher footing than other sequestration projects.

For now, carbon sequestration by kelp is still in the early stages of research science. At present, the Nature Geoscience paper is an interesting publication that provides an initial estimate of carbon fluxes by macroalgae. As research expands over the next several years, the seaweed aquaculture sector may provide new, creative options for conservation and climate change mitigation that can be amplified by incentivizing policies and the offset markets.

[3] To be economically efficient, research would need to quantify how cultivation methods and harvest timing affect carbon release compared to a natural growth baseline. Typically, we would expect reduced carbon released in cultivated systems, since commercial users want to maximize their take of kelp biomass. This may be partially or entirely offset by the increased productivity of complex aquaculture techniques.