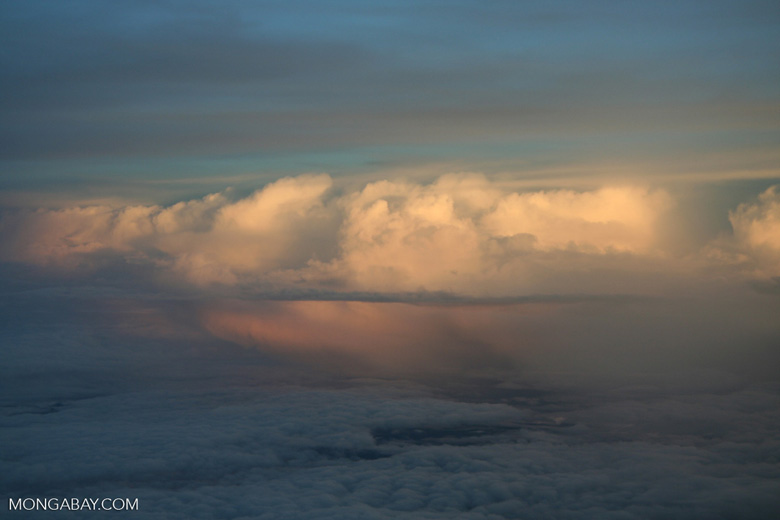 Editor’s note: This piece was originally published on Mongabay, September 25th, 2015, by Patrick Cage and John-O Niles.  The views expressed in this commentary are those of the authors.

The climate change world is abuzz. If humankind burns all the fossil fuels we can currently get our hands on, all of Antarctica will melt. It’s a phrase that sounds like an inversion of “when hell freezes over,” but one recent, high-profile study indicates the world will lose most of its ice under the business-as-usual path of continuous fossil fuel burning. If we delay too long in the transition to renewable energy, and take too long to stop cutting and burning forests, the entirety of the Antarctic ice sheets will melt (as well as its little cousin, Greenland). This would likely bring about 200 feet of sea level rise.

Enter the United Nations Framework Convention on Climate Change to the rescue.

This December, Paris will host the twenty-first meeting of the Conference of the Parties (affectionately known as COP21). While an annual migration for climate hawks, hopes are especially high for this year’s COP in anticipation of the coming Paris Agreement, the post-2020 replacement for the Kyoto Protocol. The goal? That all countries will agree on a path forward to mitigate and adapt to climate change.

Working towards this is the ADP, the negotiating track tasked in 2011 with drafting the new Agreement before COP21 in December 2015. (That is, the pre-negotiations series of negotiations.)

This September, ADP negotiators walked into the most recent meeting, ADP 2.10, facing ten negotiating days before Paris. Their mission: develop a concise but complete draft negotiating text for the COP in Paris. Their armament: the Co-Chairs’ Tool, a classification scheme for the official negotiating text, which contains every piece of text proposed by a country thus far. Their progress: uncertain.

Aspects of this tripartite Tool been elaborated upon elsewhere. A quick summary, as a microcosm of the climate negotiations as a whole: All Parties (UN-speak for constituent countries) want a universally accepted Paris Agreement. But they diverge on what the contents should be, and an agreement with legal force (like the Paris Agreement) is about as easy to edit as an inscribed stone tablet. To avoid a “lowest common denominator” outcome, COP decisions in Paris (distinct from the capital “a” Agreement), can help raise the level of ambition and still allow countries future flexibility. Hence, the Co-Chairs Tool has Part I, with text for the draft Agreement (the stone tablet), and Paris II, with text for the lower-profile COP decision. Part III of the Tool is either a waiting room for admission to Parts I or II, or a form of limbo, depending on the clause.

Now, with ADP 2.10 over, the Tool has served its purpose and observers are scratching their heads about the progress made. And while a stroll through Part III of the Tool reveals options to make even climate wonks’ heads spin, some (like Part III, paragraph 66.c) don’t have a snowball’s chance in RCP 8.5 of making it into the Paris outcome.

The primary signpost is the session’s Working Document, a compilation of anonymized stances from ADP 2.10. This points towards a dozen snippets of negotiation text that have been given the thumbs-up for inclusion in the draft Agreement or decision.

That’s progress, but at a glacial pace. Half of these dozen pieces are standard treaty provisions – that the document will be translated into the UN official languages, for example. The others are also fairly low-hanging fruit – clauses “anchoring” past institutions to apply to this agreement as well. Two sections now have concrete guidelines, but they’re still just guidelines.

In total, this approved text is enough to fill maybe two of the roughly 40+ pages likely to be on the negotiating tables of COP21 this December.

So what else is on the (negotiating) table for the remaining 38 or so pages? Based on the working document, most areas with momentum are conceptual and basically climate negotiations staples (e.g. differentiation between countries, the expectations for Sweden do not match those for Lesotho). But some areas of agreement are more palpable:

The draft Agreement will almost certainly allow countries to transfer mitigation units through market mechanisms, probably to fulfill their nationally determined contributions (NDCs) to mitigation. In other words, a country will be able to buy carbon offsets from another and count this as reducing its emissions. This would be similar to the Clean Development Mechanism under the Kyoto Protocol, which spurred massive innovation.

Noting that REDD+, a payment system to slow tropical deforestation, is now fully ready for implementation, there will likely be direct recognition in the Agreement to spur future investment. (The major remaining question is whether and how much outgoing REDD+ payments will count towards countries’ emissions reductions.)

Several ideas gaining traction are: regular cycles of commitment (most likely at the scale of 5 years), global and national emissions budgets, and a principle that climate finance should pay equal attention to slowing climate change and adapting to climate change.

One drama to watch unfold will be the move by the G77/China (the developing country group) to establish the climate change displacement coordination facility, an institution to grapple with the upswing in refugees from climate change-related disasters. This proposal probably won’t move beyond bargaining chip status, but it’s also the main mechanism proposed for Loss and Damage, a contentious portion of the text covering climate events that cannot be adapted to (like megadroughts). Currently, Loss and Damage is unmentioned in Part I of the Co-Chairs’ Tool.

There will be a push to get compliance (and non-compliance) into the draft Agreement. Ultimately, any compliance arrangements will almost definitely be “facilitative in nature,” stopping short of the “international climate justice tribunal” proposal currently biding its time as paragraph 97 in Part III of the Co-Chairs’ Tool.

Yet another exciting area will be climate finance, though the entire section is still highly molten.

It is probable that there will be a new transparency framework in the Agreement to fact-check that countries’ emissions goals are definitively fulfilled. This will be flexible, but also prevent past snafus.

Because Paris will probably bring a soft agreement, with a minimum of dramatic new commitments, we should expect technology development and transfer and capacity-building to have significant stage time. Together, these areas enhance the resourcing and training necessary for low-carbon leadership, laying solid foundations for future emissions reductions. That might not be the most satisfying outcome, but it’s a good start, considering political realities.

Coming out of ADP 2.10, we have a better handle on which areas to watch for in the release of the Co-Chairs’ forthcoming document. Due out the first week of October, this paper will position countries for ADP 2.11, the last negotiating session before the COP in Paris. After that, the final draft negotiating text for Paris will emerge, giving both Parties and the public the full picture of the final possibilities for the Paris Agreement in December – and whether we might make progress faster than our melting ice sheets.

The standing question is: Will the negotiators at the COP in Paris this December be overwhelmed by the current buffet of possibilities? Or will cooperation prevail at ADP 2.11?

Only time (namely, the five remaining ADP negotiating days) will tell. After that, of course, countries will have ten days at the Paris negotiations. But by then, countries will have crystalized their positions and it will be hard (though not impossible) to take a divergent text and turn it into an Agreement that, among other things, is strong enough to hold Antarctic ice sheets in place and prevent unfathomable sea level rise.