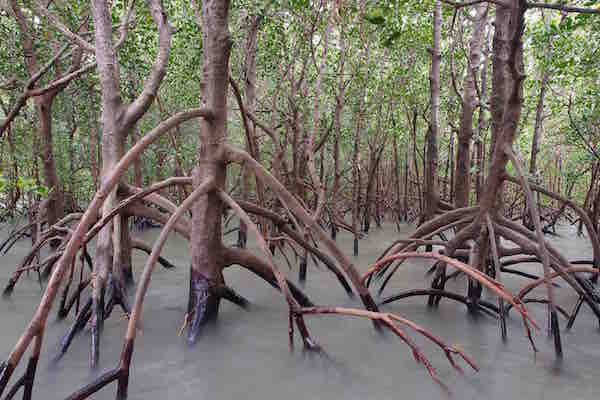 [This guest article is authored by GHGMI’s Research Intern, Sydney Duckor.  Sydney currently attends high school in California. After graduation, she is hoping to attend Georgetown University, with a future career in politics.]

Neglected in the field of carbon management until very recently, is the crucial role that coastal ocean ecosystems play in carbon sequestration. Known as “Blue Carbon”, the atmospheric CO2 that has been captured and sequestered by living marine organisms is often equal to or higher than that of terrestrial ecosystems. In one of nature’s most elegant designs, coastal ecosystems such as mangroves, salt marshes and seagrasses pull CO2 from the atmosphere and store it in the form of biomass (plants) and in the sediment below. In fact, of all the biological carbon captured in the world, more than half (55%) is captured by marine organisms.[1]

While humanity is well aware of the ocean’s ability to sequester massive amounts of carbon, somehow, it has been overlooked in the dominant climate change conversation as a potential lever for change. Traditional messaging has failed to factor in a large piece of the global puzzle, instead highlighting the usual power plants, deforestation, or the melting of ice caps. However, recent efforts to calculate and quantify blue carbon have given shape to this emerging area of carbon management, and with new urgency. So, why the sudden and loud call to arms about blue carbon? Well, to put it bluntly, because there may not be much left to manage in a few years. Coastal blue carbon ecosystems are some of the most threatened ecosystems on Earth, with an estimated 340,000 to 980,000 hectares being destroyed each year[2]. Learning how to measure and manage the CO2 sequestration for these systems now has great new imperative, and the methodologies for work in this area have come just in time.

When evaluating the long-term potential of coastal ecosystems to capture and store carbon, it first helps to understand how these systems differ from terrestrial systems, what the current barriers to success are and what, if anything, is already being done to protect them. Coastal carbon ecosystems are no different than terrestrial systems in that when plants are destroyed, they release most of the CO2 they were storing. The kicker here, though, is that the ocean is the largest carbon sink in the world, with millions of miles of coastal habitat, so when mangroves, kelp forests, sea grass beds, and salt marshes are destroyed, the Earth’s carbon storage capacity diminishes substantially. However, it’s not just the quantity of potential blue carbon ecosystems that has caught our eye, it’s the effectiveness of those systems at sequestering carbon. The Worldwide Watch Institute states that tidal salt marshes, mangroves, sea grass meadows, and kelp forests, “Compare favorably with and, in some respects, may exceed the potential of carbon sinks on land[3]. If you look at the quality of carbon, compared to forests, you will find these habitats are 15 times more effective per unit area,” meaning that they have better potential to sequester more carbon within a smaller space. An additional study states that, “One hectare of healthy sea grass has the capacity to hold 15 times the carbon of one hectare of Amazonian rainforest.”

With observations like this, we cannot continue to ignore the carbon potential involved with marine ecosystems when we discuss how to measure and manage carbon as part of a global strategy. The ability to right this ship becomes harder, however, when we realize that not only have we failed to improve these blue carbon systems, but humanity is actively destroying these valuable carbon sinks at an astonishing rate. Activities such as farming, aquaculture, timber extraction, and real estate development have rapidly deteriorated these coastal habitats over the past century, faster than any other ecosystem. Specifically, 30% of sea grass coverage, 50% of tidal marshes, and 50% of the world’s mangroves have been lost. As a result of this habitat destruction, over a billion tons of CO2 have been released. This is equivalent to Japan’s entire annual power sector emissions.[4]

Recent trends indicate a loss of even greater sequestration potential when we factor in the high efficiency of blue carbon habitats in withdrawing CO2. Pretty bad, huh? But the unsustainable trend gets worse: A group of studies compiled by the Blue Carbon Project identify the annual rate of loss as being 1-5%, and estimate that it will increase. The same study classifies the recent loss of terrestrial forests as stable or decreasing, or in a better state than coastal carbon ecosystems. Not only are coastal blue carbon habitats in poor shape at present, but the loss is increasing, and projected to worsen. [5]

Achim Steiner, UN Under-Secretary General and UNEP Executive Director, expressed his concern that while deforestation issues are currently on the political radar, the roles of other ecosystems in climate change continue to be overlooked.[6] Additionally, Dr. Carlos Duarte, chief scientist at the Mediterranean Institute of Advanced Studies confirmed that, “We know that land use change (being more conscious of how we utilize terrestrial resources) is part of the climate change challenge. Perhaps less well known is that the global loss of what we could call our ‘blue carbon sinks’ such as mangroves and sea grasses are actually among the key components of the increase in greenhouse concentrations from all land use changes.”[7]

So, what’s being done to both protect these habitats and include them in the global conversation on climate change?

While specific funding for blue carbon related projects is still lacking, there is interest and action being taken by multiple governmental and non-profit organizations to keep it in the conversation. The USGS, USEPA, FWS, and the White House CEQ all maintain an interest in blue carbon related issues and the global agreement reached at the Paris Conference on climate change provides a solid platform for continuing work in this area.

Recently, a meeting was held for the U.S. Coastal Blue Carbon Working Group, which brought together experts from across the country to begin outlining what is needed to incorporate blue carbon ecosystems into the U.S. National GHG Inventory. As of now, the National Oceanic and Atmospheric Administration (NOAA) is exploring how to incorporate carbon services into existing domestic and international policies (for example making sure more organizations recognize blue carbon sequestration as ecosystem services to make them federally accountable), filling science gaps, and providing support for efforts to develop protocols for including coastal carbon services into carbon markets. According to the agency, their plan is to incorporate carbon services into federal policies and programs governing coastal habitats, and support the development of voluntary markets for coastal carbon, which will entail providing protocols for carbon accounting.

Additionally, as of November 2015, there is a newly approved Methodology for Tidal Wetland and Seagrass Restoration and a Coastal Blue Carbon in Practice manual to help coastal restoration project developers access carbon finance.[8]

So, how can we keep the momentum going?

The Greenhouse Gas Management Institute (GHGMI) is well equipped and prepared to begin working in this new field; its experience in monitoring and reporting carbon stocks, bringing blue carbon experts into the fold of the larger carbon management community, as well as educating countries on how to incorporate blue carbon into inventories puts them in a great position to participate in this area.

Nevertheless, before organizations like GHGMI can propose any kind of action, there are a few hurdles that need to be overcome. More research is needed to better understand where on the planet carbon is stored in these habitats, how rapidly the habitats are being modified with a risk of carbon release into the atmosphere or water column, and the mechanisms and rate of carbon emissions that follow habitat conversion. We need to develop cost-effective measurement, reporting, and verification protocols and methodologies to enable blue carbon to be quantitatively incorporated into carbon markets and other policy mechanisms. Research needs to include regionally specific estimates of carbon sequestration, storage, and emissions from salt marsh, mangroves, and sea grasses; sea-level rise impacts (and the fate of carbon following submergence).

You would think that as one of the world’s most powerful and influential countries, the United States would be a leader in blue carbon efforts, however we aren’t even close. Out of every single coastal carbon management program that exists, (there are around 34 of them[9]) the United States is not a direct member or participant in any of them. While a few of the initiatives are directed within the U.S., the U.S. government isn’t doing much within the field.

According to the NOAA, no federal statute, regulation, or policy accounts directly for the carbon held in coastal habitats. Outside of the United States however, an organization called Conservation International has started a blue carbon initiative dedicated to, “implementing policies and projects for conservation of blue carbon ecosystems,” in foreign countries such as Costa Rica, Ecuador, Indonesia and the Philippines[10]. Including the Conservation International project, there are some other initiatives focused on integrating blue carbon legislation to climate change policies. At the Global Landscapes Forum in Paris, Australia announced the International Partnership for Blue Carbon, which is a massive step towards the improvement of coastal marine environments[11]. It establishes a “collaborative network of governments, non-profit organizations, intergovernmental agencies, and scientists,” and is a perfect opportunity for anyone interested in the subject to get involved.

While the NOAA’s suggestions and current environmental groups actions are a step in the right direction, the United States needs blue carbon legislation included in international policy. According to the ICUN, as awareness regarding coastal marine habitats and blue carbon has risen, some countries have begun to include coastal blue carbon ecosystems in their national greenhouse gas inventory[12]. The clauses of the Paris Agreement are a great opportunity for change, and an even better opportunity for the United States to get on board with this branch of climate change mitigation. We can’t address the world’s climate change issues when we exclude blue carbon, and this deal provides a perfect avenue through which we can create effective change.