Have We Created a “Real” Muddle for Emission Markets with the Paris Agreement? 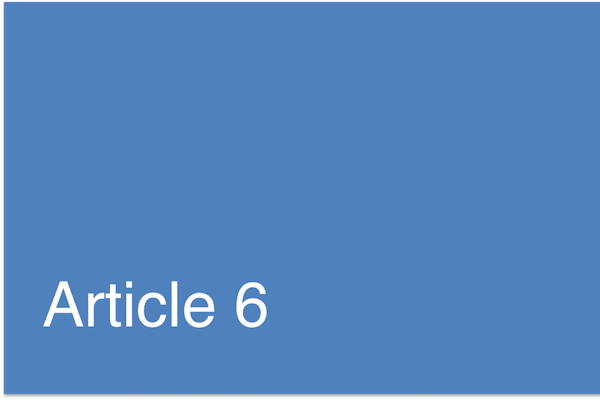 We are just a few weeks away from the next session of international climate change negotiations following the successful Paris Agreement last December. As I detailed in an earlier post, the next several rounds of negotiations will focus on elaborating a long list of rules and provisions necessary to operationalize and implement the Paris Agreement.

In this post, I am going to focus on one component of the Agreement that is probably of great interest to you and many other carbon management experts. It is Article 6 on environmental markets. Let me first jump to the conclusion of this post. The answer is yes, we have a textual muddle in the Agreement that will be a headache to deal with. Now, let me explain.

The Agreement has effectively created another new environmental commodity titled an “internationally transferred mitigation outcome” or ITMO. What exactly is an ITMO? Nobody really knows yet. Will they be tradable? One would assume, but who knows? How would they be created, certified, traded, etc.? Again, we don’t yet know. Emission markets are a sensitive and divisive topic in the international community, with strongly held opinions. And when negotiators can’t agree on specifics, a common practice is to manufacture new undefined terminology as a vessel to capture and defer dealing with difficult topics. ITMOs are a rhetorical embodiment of a concept to link emission markets and Nationally Determined Contributions (NDCs) under the Agreement. In Paris, what that linkage looked like was out of reach of the negotiators.

Article 6 also seeks to establish a new “mechanism to contribute to the mitigation of greenhouse gas emissions and support sustainable development”. What exactly is this sustainable development mechanism (SDM)? Well, the Agreement really does not say much. It does say that it is to be governed by an international body. It should involve the private sector. And with some novelty, it is to “deliver an overall mitigation in global emissions.” That is about it. Strictly looking at the text, it could be anything. Yet, it is implicitly understood that this new mechanism will be something akin to an offset program and built on the existing Clean Development Mechanism (CDM) and Joint Implementation (JI) programme under the Kyoto Protocol. How this mechanism will ultimately structured, though, is still very much an open question.

The adopted decisions that are a companion to the Paris Agreement provide some further guidance on this new SDM. But, as I will explain, it’s not clear whether that guidance is of much use. Paragraph 38 contains the core of this guidance.

38. Recommends that the Conference of the Parties serving as the meeting of the Parties to the Paris Agreement adopt rules, modalities and procedures for the mechanism established by Article 6, paragraph 4, of the Agreement on the basis of:

(a)            Voluntary participation authorized by each Party involved;

(b)            Real, measurable, and long-term benefits related to the mitigation of climate change;

(d)            Reductions in emissions that are additional to any that would otherwise occur;

(f)              Experience gained with and lessons learned from existing mechanisms and approaches adopted under the Convention and its related legal instruments;

I want to focus on subparagraphs (b) and (d). The other subparagraphs are relatively uncontroversial; regarding that no country is forced to participate in the mechanism, that it will necessarily need to consider specific mitigation sectors such as energy versus agriculture (duh!), and that outputs should be verified. And the last two sub paragraphs clearly create a linkage to CDM, which also labelled its verifiers “designated operational entities”.

Subparagraphs (b) and (d), though, define the principles and quality criteria for this new mechanism. Let’s break them down to show what a muddle they are.

It seems that, at least on this specific issue, the emission offset community, myself included, has taken on the characteristics of a used car salesman … spouting off a term that sounds good to everyone but that does not clearly mean anything. We might as well have required that offset projects be ‘beautiful’ or ‘synergistic’ or some other vacuous buzzword that can be employed to sell an idea. You may have thought you knew what a ‘real’ offset project was, but hopefully this essay convinces you that upon inspection, the offset community has fallen under a form of group think. What is amazing, and worthy of its own sociological study, is how we managed to go for long in our development of standards, laws, methodologies, manuals, and articles using such an ambiguous term for our fundamental concepts of offset project quality. I propose that the carbon offset community do away with the term ‘real’ when referring to offset project quality criteria. If your concern is completeness, then label it as ‘completeness.’ If it is ‘accuracy’ then say that explicitly. If you want to forbid forward crediting, then say forward crediting is not allowed. If we want offset projects and offset policies to be viewed as credible we need to speak with purpose and precision instead of just saying what sounds good. I hope that we can assume that ‘absence of fraudulent information’ is a criterion that everyone understands implicitly.

So, in sum with SDM under the Agreement, we have a no brainer quality criterion, a new requirement for net mitigation, one really meaningless term, and a failure to properly express the defining characteristic of an offset. Not an auspicious beginning.

Lastly, we have to talk about the Paris Agreement’s ugly duckling. Article 6 refers to the inclusion of paragraphs on “integrated, holistic and balanced non-market approaches” within an Article principally focused on environmental markets. Without going too far into the politics of this issue, it mostly comes down to certain countries not being fans of emission markets, and so these countries needed to be given something in exchange for letting the other language on markets be included. What will become of these “approaches” is anyone’s guess. They may never be meaningfully operationalized. If they are established in some form, no promises that we will be viewing swans.

We have a lot of work ahead of us to elaborate this ground-breaking treaty. It is worth recognizing, though, that much of the ambiguity in the Agreement was necessary in exchange for reaching consensus with so many diverse national governments.

With respect to emission markets, I wish I could say that I am excited that this issue was explicitly addressed in the Agreement. It was not a foregone conclusion that it would be. As I have observed emission allowance and offset credit markets over the years, my enthusiasm for them has slowly waned. (I’ll have more to say on this in the future.) And specifically, with respect to the language in the actual Agreement on markets, with all its sloppiness, the negotiations have made the work of correcting the problems of the past more difficult. What a missed opportunity. Hopefully, though, we will muddle through.

5 responses to “Have We Created a “Real” Muddle for Emission Markets with the Paris Agreement?”